A lot of runners, cyclists and swimmers wanted to get into multisport. When you decide to take part in Triathlon, Duathlon or Aquathlon, you will need to know the rules of Multisport. Triathlon is a sport event with three disciplines, consist of swim, bike and run. Duathlon is most likely similar to triathlon being the lack of swim and Aquathlon is another derived from triathlon that has omitted the cycling part. In multisport, there are certain rules you must follow and the rules you must be learned, "be informed".

On the 3rd Leg of Powerade Duathlon in Nuvali last November 19, 2011, Noelle "Kikayrunner", Joy and I supported our teammates from Endure Multisport and friends who participated in the race. While we were cheering, Coach Rick Reyes of Triathlon Association of the Philippines (TRAP) noticed that there's a lot of participants were using MP3s and keep reminding them to take it off. We told him that maybe those are runners and might not be aware of the rules. He asked if MP3s are allowed in road races and we gave him a nod. In this regard, I thought of giving you some rules in multisport and consolidate it for you so that it must remember specially for the newbies and for those who wanted to take part into multisport in the future.
Rules are placed for Safety and Fairness at the higher standard.
1. Multisport prohibit any outside assistance from anyone else except from race staff and crew.
2. Abandonement - if you drop something on the course, you MUST go back and get it. You don't want to be disqualified at any cause.
3. Helmets is mandatory on the bike. Strap must be fastened before you get on the bike and after you get off the bike.
4. All swimmers must wear the swim cap provided in your race packet.
5. Mount and dismount bicycles at the indicated mount/dismount line or sign only.
6. No headphones/ipods/walkmans/etc allowed during the race at any time!
7. Race Numbers or Bib Numbers MUST be visible at all times in order for athlete to be timed. You must have your number on the front side of your body on the run portion and finish line.
8. No bare torso in run leg.
9. No Drafting allowed on the bike
10. Athlete Conduct
The rules of multisport must be learned so that the participant do not get disqualified or penalized for the mistake. But rules may differ depends on the race organizer which means you must read and do your research before each race.
I hope I was able to help you understand the rules in multisport.
By FlyingBoar - November 20, 2011 4 comments:

Let Sparkle Spa relaxes you and soothes you.

I am raffling away one (1) GC for my Storm Chasers group. The contest is open to those who lives in Paranaque since the Spa is located in that area.
The official entries are :
And the Winner is....... 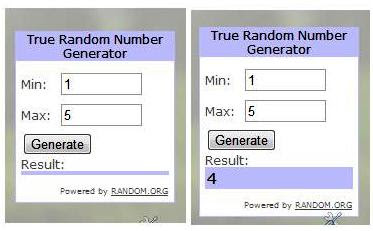 CONGRATULATIONS Ms. Apple Ticsay!!! (lakas manalangin! hahaha!)
You may claim your GC at Storm Chasers' home base every Thursday.
By FlyingBoar - November 17, 2011 No comments:

McHappy Day on Nov. 27! One Giant Step for Reading 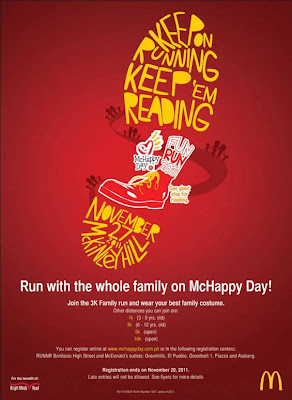 The McHappy Day Fun Run is for the benefit of the Bright Mind Read project one of McDonald House Charities (RMHC) flagship program. BMR is a partnership program with the Department of Education (DepEd) that aims to provide beginning reading curricula and tools for grade one public school students all over the country. All proceeds from McHappy Day will be used to purchase BMR kits to reach more public schools.

They have different categories:

For 1k participants they can decorate and/or design the bib that will be given to them. For the 3K and 5K participants they are encouraged to wear their best head-dress for the hat parade. While for the 3k family, the team should wear costume related to each other. E.g. Goldilocks and the three bears. Winners for these contests will receive a prize. For the 1k and 3k run for children, parents/guardians should submit a xerox of NSO birth certificate or passprt

Prizes are as follows:

Registration prices for the race are as follows: 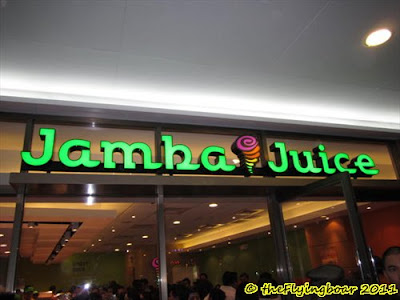 Jamba Juice now blending in Manila!
Jamba Juice famed for refreshing delicious drinks and better-for-you- snacks which synonymous in California.
Better-for-everyone? Why? Jamba Juice uses real fruit and processed fruit juice only. From smoothies to juices, from yogurt to oatmeal. Jamba Juice is bringing the same products and technology to the country so that Filipinos can have the Jamba juice experience and find out firsthand why it has been a runaway favorite among American celebs and urbanites alike since its inception in 1990. 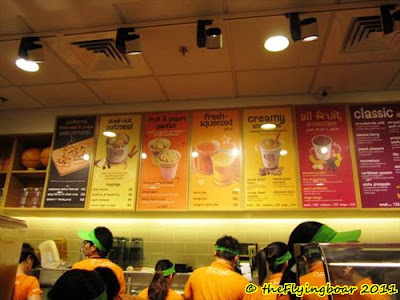 Jamba Juice can be a good recovery drink after your active activities. For runners, gym buff and multisport enthusiast like me, they offer "Protein Berry Workout", a combination of strawberries-bananas-soymilk-soy or whey protein boost. All their smoothies have natural ingredients, every smoothie gives you energy, immunity, daily vitamin and protein. 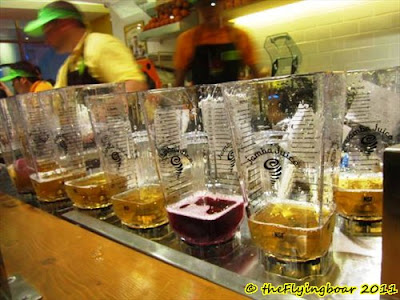 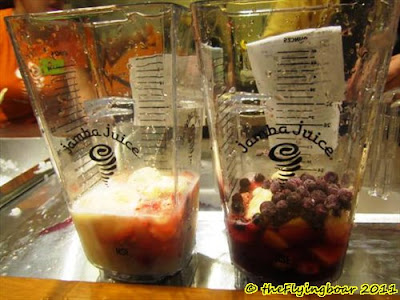 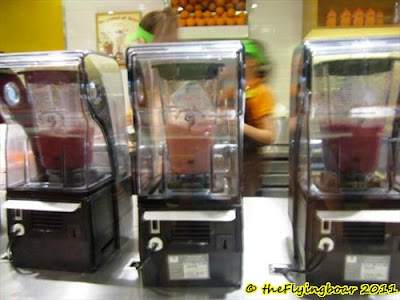 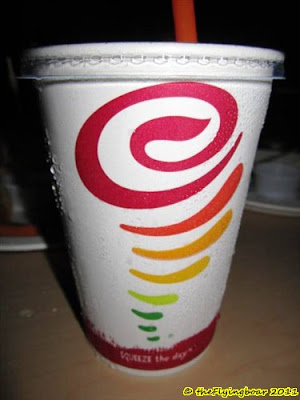 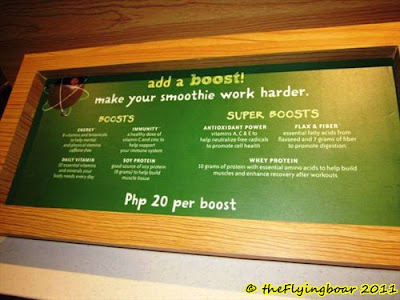 Bringing Jamba Juice in the Philippines is made possible by The Max's Group of Companies. Jamba Juice also committed to support promoting Philippine mangoes to the rest of the world by planting a Guimaras mango tree at the Guimaras mango park.
Jamba Juice is located at 7th Ave. cor 29th Ave. South, Bonifacio Global City across R.O.X. 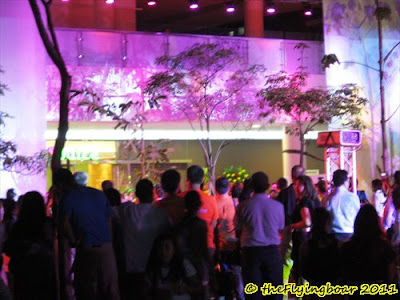 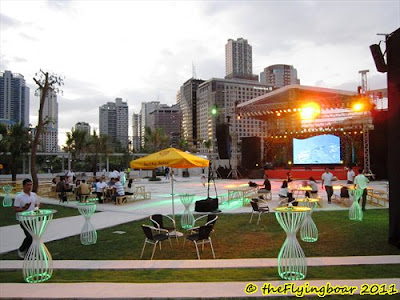 Jamba Juice will be the new craze in town! Check it out and have a smoothies life! 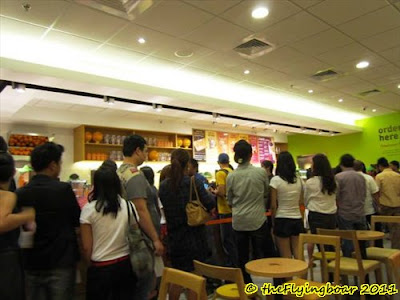 Where will you be on the week of December 3-4? What road races have you registered? There will be ten (10) local races and two (2) international races on this week. Early this year, a group of friends who loves to run and travel made their minds to do the Macau Galaxy Entertainment International Marathon (Macau Marathon). When Cebu Pacific released their early book sale, eleven (11) soles never had a second thought on booking. =) 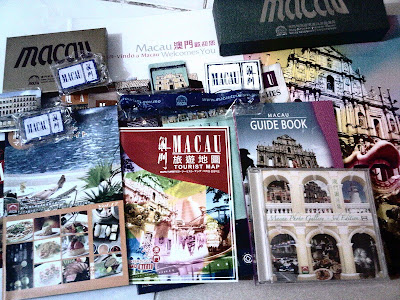 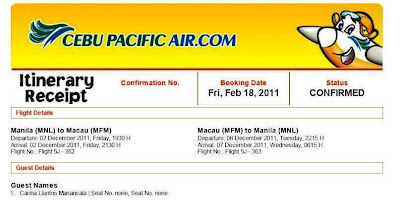 Macau, I've never been in this part of China. Macau was the first and last European colony in Asia. They said, when walking through the old city of Macau you could induce yourself you were in Europe, at least for those who have already been to Europe. I've been to some part of Europe and I will tell you if it's true ;)
What will I expect in Macau? When I travel, I'll make sure that research have been done to know about the place and make an itinerary to maximise the travel especially if you only have a limited of time. These 11 soles are excited to explore the was once an overseas city of Portugal. 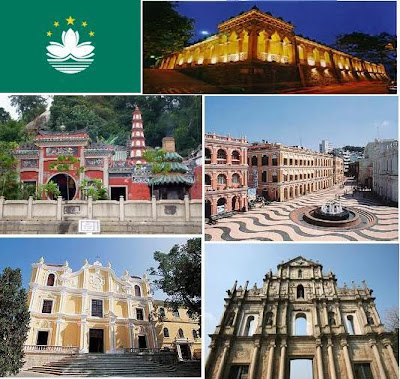 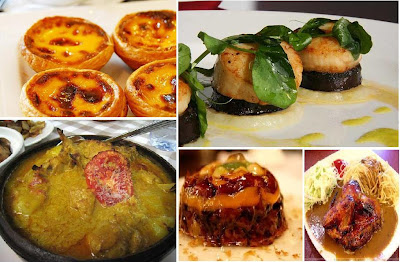 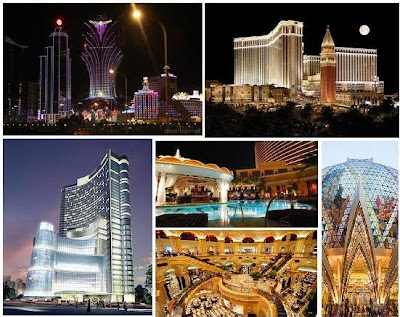 Hotels and Casino
and a lot more to explore!
By FlyingBoar - November 09, 2011 No comments:

2-in-1. RunBGC with Flag Football. 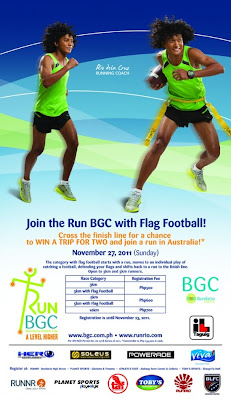 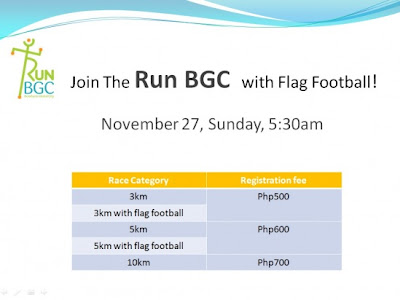 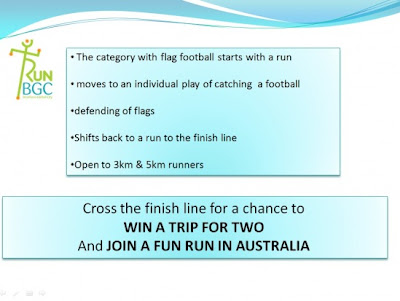 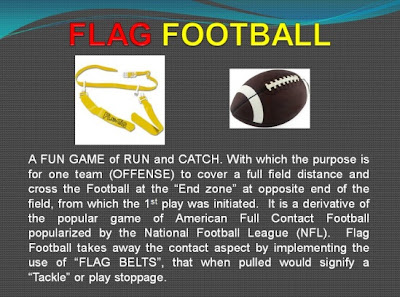 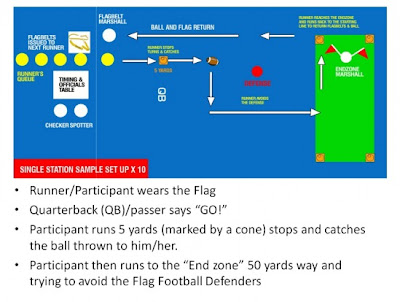 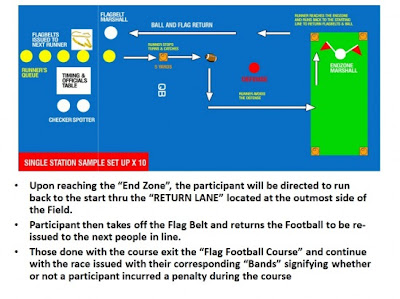 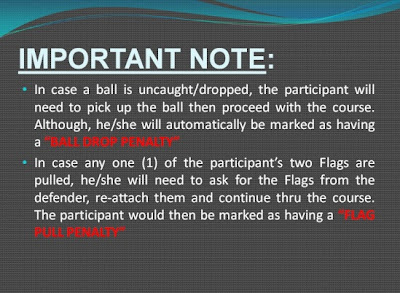 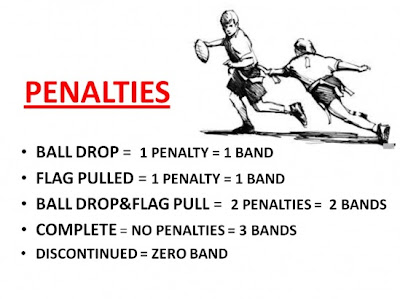 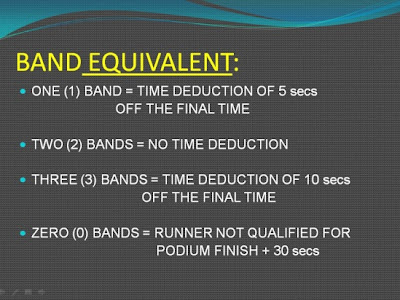 Riovana: the Sole of Running 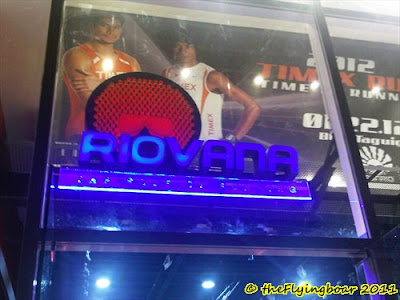 Another running specialty store to serve you at Bonifacio High Street, the RIOVANA.
What Riovana has to offer?
The store is owned by Rio dela Cruz or "Coach Rio" to many. The store aim to deliver new running experience to the running community. It's a one-stop-shop for your running needs and for your active lifestyle necessities. The store has shower rooms for runners to use, lockers for your things (first come first serve) and lounge for the registration area. And when running during your training around BHS, you can put your hydration bottles at the window sill of the store.
Address:
9th Ave. cor. 28th St. (near Honda)
Bonifacio Global City
Taguig City
By FlyingBoar - November 03, 2011 No comments: