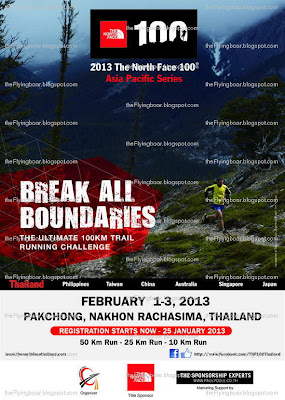 The second edition of Thailand's Ultimate Trail Running Challenge, The North Face 100® Thailand, will take place in the natural surrounds of Khao Yai on 02 February 2013, offering a unique and adventurous trail running experience.


The trail run will take place in Amphoe Pakchong adjacent to Khao Yai National Park, 150 km north east of Bangkok. The adventurous and hilly trail leads runners through fruit plantations and past Thai temples, combining nature and sport in an adventure run.

The start, finish and race headquarters will be at Villa Paradis Hotel, approximately 40km from entry to the National Park.

A highly competitive record field is expected to take part in the 2013 The North Face 100® Thailand, with many competitors taking part from Thailand and around the world. The trail running concept has proved popular with runners who are looking for a challenge.


“Registration is now open for the 2013 event and already interest is high. We are looking forward to a bigger turnout this year with lots of Thai runners and strong interest from overseas runners also,” added Srivikorn.

Under the concept of “Take Only Memories: Leave Only Footprints”, The North Face 100® Thailand will be supporting the Thai Elephants Research and Conservation Fund (TERCF). Khao Yai National Park is home to the largest population of wild Thai elephants and a percentage of all entry fees from The North Face 100® Thailand 2013 will be donated to the TERCF to support their worthwhile work.

Promoting the spirit of exploration since its inception in 2008, The North Face 100® has become the largest distance trail running series in the Asia-Pacific, with events in Taiwan, Philippines, China, Australia, Singapore, Japan and Thailand.

Registration for The North Face 100® Thailand is now open online, at www.goadventureasia.com/TNF/tnf.htm.